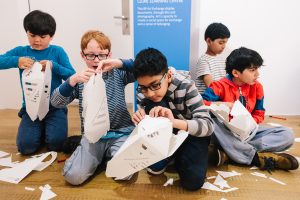 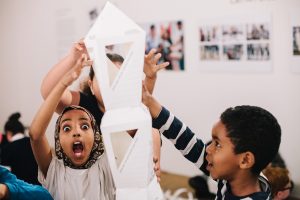 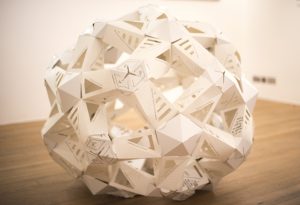 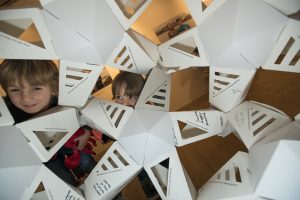 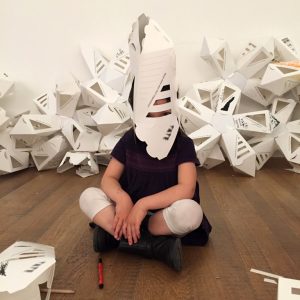 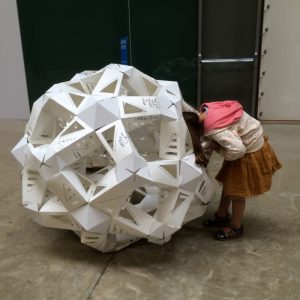 For the launch of the new gallery building in London, designed by Herzog and de Meuron a new form of engaging school children and general public with contemporary architecture was introduced. The creation of a hands-on participatory activity constructing new spaces with the public successfully blended architecture, art and design, as well as creating a dialogue between the concrete space and the newly constructed imaginary landscape.

Torriano Primary School in London was the first to join the experience in a workshop with artists Albert Potrony and designer Noa Haim. The group of year 4 children put their dexterity and spatial perception to the test by  constructing a large collective structure that the public were invited to add to during the launch programme for new extension of Tate Modern.

Visitors during the opening weekend dropped in to the McAulay Gallery to create their own replica of the new Switch House. After putting together the individual paper models visitors could take it with them for a walk in the building, leave their impressions by writing or drawing on the model and then add it to a growing structure which took the form of an imaginary landscape.

A system of cardboard connectors was designed to support connecting the individual paper models. Participants could choose between three different classical polyhedral prisms: Tetrahedron, Octahedron and Pentagon to connect one twisted pyramid model with another. The variety of connectors was permitting the creation of dissimilar landscape configurations in the gallery space.

Though, the exercise was challenging in terms of manual dexterity and 3D perception the space was crowded with public of all ages. Some people made one model and left whilst some  families settled in and spent more than an hour making together inside the room. The (never) final outcome revealed an endless tower, spheres, stars, domes, crosses and sun flowers which populated the gallery space until July 14th.

The BP Art Exchange team led by Annie Bicknell with artist Albert Potrony, designer Noa Haim and Students from Central Saint Martins and the University of Westminster, London guided the visitors during the opening weekend.

This collaborative making process provided a window into some of the working practices used by artists working with students, refugees and communities in the associated display ‘Belonging Together’ as part of Tate’s International learning project BP Art Exchange curated by Annie Bicknell.

If you did not get a chance to take part this time, there will be another opportunity to get involved on 28th November 2016 2-4pm, Level 5, Switch house, Tate Modern.